Idiocracy? The White House’s ‘Healthy’ Diet Plan for Kids, Brought to You by Subway

What The Big Banks Don't Want You To Know

The Maryland Mall Shooting is an oxymoron. It didn’t happen. There was no shooting at any Maryland mall at any time this year. This is a phony just like Sandy Hook, the Boston Smoke Bombing Hoax, the Nairobi Mall fabrication, the DC Navy Shipyard (fake) Shooting, and all the other terminal hoaxes heaped upon the people this past year.

For the sake of urgency this brief post is initiated. The Maryland Mall Shooting is a total fake.

This fake shooting is merely another DHS-created scheme for the slated purpose of garnering revived public support for ‘gun control.’ It is also a plot for attempting to achieve the institutionalization of martial law. The hoax demonstrates the desperation of the Zionist cabal, as the initial goals of destruction of the 2nd Amendment by these schemers had clearly failed.

Let it be said, repeatedly. The Maryland issue (or event, not a shooting) was a drill. Like the other hoaxes, no one died, and no one was injured.

The victims and shooter are all fake. There was no gunfire at the mall. Let anyone prove otherwise.

The degree of fabrication can be seen in the over-kill-like response to a supposed lone gunman who went on a rampage. No one is in a rush to do anything. It is all for effect, a means of intimidation – a kind of imagery for the solicitation of public support for Zionist schemes.

How is this anything other than a drill? Let anyone prove that it is real. Pictured are armed mercenary-like moles, ready for urban combat? It is absolutely not real, brought to the world by the gun grubbers of the Zionist cabal:

There is nothing else to do so the storm troopers take the time to look over at the camera:

Shoppers have no idea that there is a real crisis and in no manner are acting in such a degree. Thus, they must be instructed to play out a crisis mode, as per the drill coordinator in yellow:

There are always plenty of crisis  actors in place. People will do anything for the almighty dollar. In Sandy Hook countless individuals were on the payroll, in some cases to the tune of tens of thousands of dollars. Whether on the payroll or not, note the couple with the child; surely, such photography is for effect. Moreover, this surely proves the hoax. 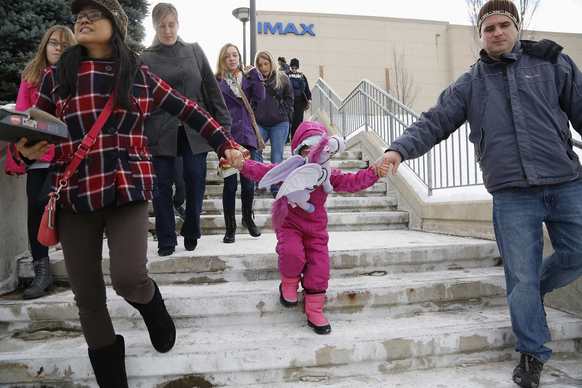 They’ve got the child spread out as much as possible, entirely unprotected, making her the ideal target for a mad gunman. Even so, do these parents have the appearance as if reacting to a real shooting with a mad gunman on the loose in the mall? In fact, their facial expressions bear no resemblance to this being a real event and, rather, prove the degree of the hoax:

There is absolutely no evidence of panic and/or concern in these individuals. There is no adrenalin or shock reaction, no evidence of any effort to protect their child. the child is merely a camera-stage prop. There was no shooting at this mall. All who claim otherwise are fabricators.
Now that the act is over, what’s next?

Here they are in action; make no mistake about it this is no coincidence.
See these two phonies here, absolute fabricators:

In fact, it is virtually certain that the woman in black with the lavender-colored cell-phone is hiding something, that is disguising her smile, as can be seen by the look in the eyes:

Surely,. there is no shock or adrenalin reaction in Regardless, she, too, is looking directly towards the camera-person; the hug, surely, is fake. It is all an act, and it is likely that such fabricators are on the taxpayer payroll.
There are additional fraudsters and fabricators, here. Note, like the previous image, that the people in fake shock take the time to look at the camera. With real shock there is actual shock plus the rush of adrenalin. Cameras are the last thing people think about in such circumstances. Moreover, where there is real gunfire and resultant bloodshed, potential victims do not take the time to look directly at the camera-person.

The two women, right screen, are looking directly towards the camera, one of them with cell phone in-hand. Who in the universe can possible claim this shooting as real? Even so, could it get any more fake than this (that is the photo above)? One person has a smirk on his face, the other, the woman with the purse and cell phone, a kind of smile, while giving a hand sign to someone, then, the other two are feigning grief.
The ‘victims’ are  just as phony as the fake grievers, created right out of the imagination of Zionist make-believe:

http://kdvr.com/2014/01/25/maryland-mall-shooting-victim-has-colo-springs-connection/
Brianna Benlolo, 21, died Jan. 25, 2014 in a Maryland mall shooting. Her Facebook profile said she graduated from a Colo. Springs high school. (Photo: Benlolo’s Facebook profile)
A victim named Brianna Benlolo? Really? Does anyone actually believe such a person exists? If so, she is merely a part of the scam, let there be no doubt about it. Then, too, for fake victims it is always necessary to have phony tributes and memorials, in this case, one that virtually no one attends:

This is a staged memorial for a staged, fake event. No one died. Thus, an analysis of the fake victims would give insight into the methodology used by Zionist fabricators for inventing this false flag events.

Idiocracy? The White House’s ‘Healthy’ Diet Plan for Kids, Brought to You by Subway

Ole Dammegård: “Terror” – are you kidding me?

A Brief History of Fake News

The Two Most Hilarious Things NASA Has Ever Said

Proof CNN Is a Military Psyop

Why Is The Bilderberg 2019 Location Still a Secret?

Alan Turing, Cybernetics and the Secrets of Life

They Actually ADMITTED There’s No Money in Curing People

Welcome to the Literal Nanny State

THEY Are Throwing IT in Our FACE! (Mini-Documentary)

The Mechanics of Deception: Wag the Dog

Does Society Realize It Is Being Initiated?

Dr. Graham Downing: The Battle For Free Will

Larken Rose: The Nature of the Beast System

The Pentagon’s Missing Trillions: What You Need to Know

The Minds of Men (Official Documentary)

The Nature of Power

It’s Official: We’re Living in the Prequel to ‘Blade Runner’

The Federal Reserve is a Trillion Dollar Lie

Confessions of a KGB Agent

Wikipedia Exposed As Corrupt Tool of The Globalists

Secret History of the Order of the Illuminati

The Dangerous Tribalism of the Ruling Class

Ian R Crane: Can you feel the Winds of Change?

Dr. Jerry Tennant: Healing is Voltage – The Physics of Emotions

Watch This Guy DESTROY the IRS with THIS SIMPLE LEGAL FORMULA

Michel Chossudovsky: The Globalization of War 2.0

Debunking A Century of War Lies

A Talking Cricket, a Self-Writing Quill, and the Coming Hive Mind

Beyond Gangster Blackface: A Critical Analysis of Gangster Rap

The DARPA/Facebook “Coincidence” You Never Heard About

Bayer + Monsanto = A Match Made in Hell